This is Wataiko.Wataiko is this. The highest praises from all over world!!

It's the oldest musical instrument in the world.
It has been a means to connect to the universe, Mother Nature, and the divine, and also a medium to express awe for the higher being and the joy of the soul.
It has evolved as performing arts in Japan, and has been an integral part of festivals and ceremonies along with the flute, the bell, and the dance.

Now there is a team of drum experts that has been hailed on world stages.
It specializes in the Japanese drum Wadaiko.

The team "Taiko-shu Ikki" has gone back long years in history and connected to the origin.
In other words, the team has gone beyond drumming as the festive, ceremonial performing arts and come around again at the harmony of humanity and Mother Nature.

The team leader Ikki Hino was brought up in the household of martial arts and Jazz.
His upbringing instilled in him the sensibility that gives birth to brand-new music by the traditional musical instrument.

Only Taiko.
Its dynamism, beauty, and delicacy are like Japanese fireworks.
The fine striking of drum sticks has sharpness like that of a sword in Japanese martial arts.

Only Taiko.
Because of that, the team has a technique that is as breathtaking as
that of Jazz drumming.

Its world of "*ma*", a space between sounds.
*Ma* is not the same as a rest in Western music.
It is rather a world of silence sprinkled with sound.
It is a three dimensional vacuum.
It is a silent space filled with spirit.

Because of *ma*, the sound that appears in it shines.
It gives a sharp edge to the drum beat.

That is the sound of "Taiko-shu Ikki."

This well-received hour-long concert showcases the impressive skills of the four-person performance group Samurai Drum IKKI. The impressive dance-like drum routines create a tangible energy in the room that can leave the audience breathless at the end of a song.
The act consists of a lead drummer and composer of the group’s original music and three women who drum, dance, and help with supporting instruments. The amount of energy in the act is impressive and at times, almost intimidating. The drums are punctuated by fierce vocal shouts and occasionally accompanied by bells and even, at one point, a beautiful flute solo. The intensity and commitment of the artists is reflected not just sonically but visually, as they perform the samurai-inspired choreography in beautiful traditional garb.

When the group pauses to explain the story behind their instruments and then again at the end, to introduce each other to the audience and promote their merchandise and CD, they are surprisingly upbeat and chirpy. The girls are charming and their leader is hilarious, cracking jokes in his self-proclaimed bad English to a crowd roaring in laughter and admiration. The cherry on top comes in the form of a lovely origami paper crane handed to each audience member as they leave the venue.

Taiko drumming is an instantly recognizable style of music. The styles may vary slightly from group to group but there is a rhythm shared by all drummers.
is undoubtedly because the training is universal and very rigorous. Many spend years training to be proficient enough to perform. Taiko may not be a religion but it is a way of life.
But taiko groups almost always include other percussion instruments as well as occasionally wind or stringed instruments. There is also a precision in the performance which is finely choreographed.﻿
Very talented drummers, as here, share their knowledge and training by forming their own groups. Samurai Drum IKKI is a group which performed here last year and, although they seemed very green at the time, they showed potential and promise.
Traveling and training are the essentials. Their professionalism and confidence just emerging last year has taken root. The art and technique has been passed along. The young percussionists of Samurai Drum IKKI are indeed maturing as this is a group on the crest of a long career.﻿
This will prove to be one of the finer taiko groups. It's well worth catching them here and now. Another show great for all ages. 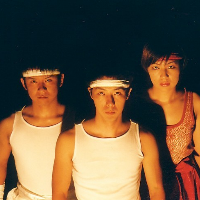 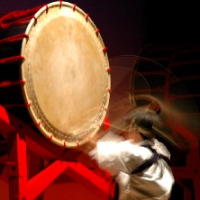 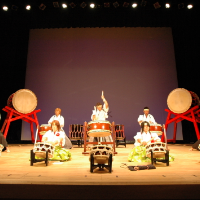 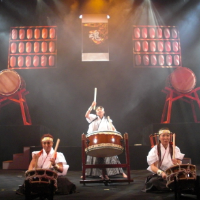 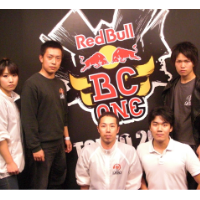 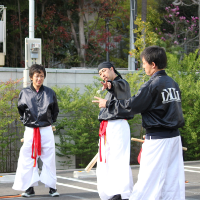